Many a virus induced epidemic has wreaked havoc so far in a vast country like India. Small pox, Cholera, typhoid, T. B., Malaria and such diseases have claimed millions of lives over the years. On the other hand diseases like polio and leprosy have left many others incapable of doing even their daily chores. As a result, all the governments since Independence have been forced to give top priority to check the proliferation of these diseases.

In the past 15 – 20 years however, the proportion of many non communicable diseases among the Indian citizens has reached an alarming level. These diseases aren’t caused by any bacteria or virus; they are primarily a result of incorrect lifestyle. Among them, heart diseases and cancer are fatal. World Health Organization (WHO) had predicted a few years ago that India is going to the world capital of diabetes and heart diseases in near future. A part of this prediction has already become a reality: India has the largest number of diabetics in the world. Diabetes, hypertension, obesity, paralysis, arthritis etc ailments has substantially reduced the efficiency of millions of Indians. This has posed dual problem of containing communicable and non communicable diseases before the government.

In the interest of all round social health, people from all walks of life need to come together and work together. Vaidya Sane Trust has been doing precisely this for the past 7 – 8 years. In this humanitarian work started by Sane Care Madhavbaug, with its world’s first Ayurvedic Cardiac Care hospital, institutions and organizations like Vision Maharashtra Foundation, Thinkmaharashtra.com, Rambhau Mhalgi Prabodhini, Lokmanya Hasya Yog Sangh, Pune, Lokmanya Seva Sangh, Ville Parle, Samadhyan, various Senior Citizens’ Associations and different caste associations have given their valuable assistance. Through its monthly magazine Arogya Sanskar, the Vaidya Sane Trust regularly educates the society about all round family health and desirable lifestyle.

In future, in order to take up the challenge of non communicable diseases, the government mechanisms, volunteer organizations like Vaidya Sane Trust, socially aware corporate companies and ordinary citizens need to come together and work in close coordination. This booklet outlines the path ahead of Vaidya Sane Trust in this respect.

The average age of persons afflicted with heart disease is seen to have reduced rapidly in recent times. The current competitive and stressful lifestyle is the cause behind this. Indeed the percentage of heart patients, especially young heart patients is nearly twice the western countries.

What must be the reason for this increased number of heart patients? Is it the modern lifestyle? How much of the increase can be attributed to unhealthy food habits, lack of exercise, sedentary lifestyle, increasing stress, increase in alcohol consumption and smoking? Or should the blame be put on the genes and heredity? What exactly is the reason that we are succumbing to heart diseases and their pre conditions?

Until some years ago, mortality due to heart diseases was much less. Today however, they have become the number one killer. Technological advancement has made life easier but it has also caused more and more number of people to fall prey to heart diseases. The instances of loss of flexibility of blood vessels, creation of blockages and severe heart attacks etc are increasing as a combined result of sedentary lifestyle and high calorie diet. 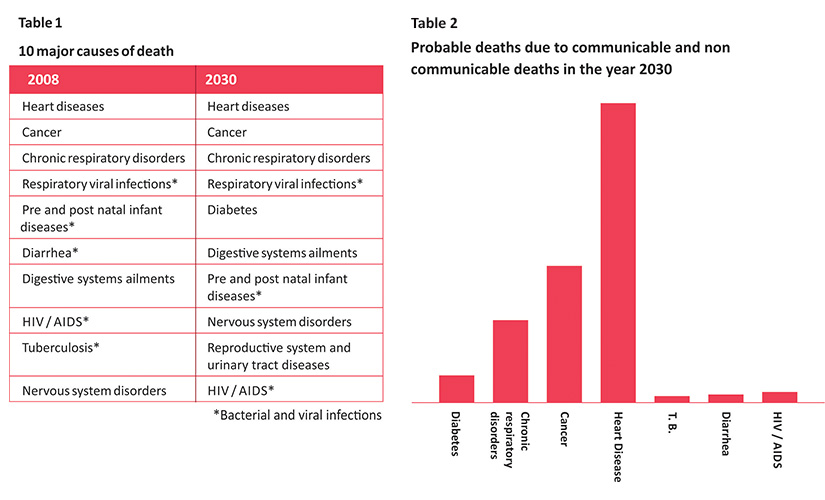 This health malady is afflicting people all over the world irrespective of age, sex, geographical, economic or social status. Contrary to earlier belief that heart disease is the ailment of rich or affluent people, it is afflicting poor and rural people with equal impunity. The effects of the disease are not limited to individual physical health; they hamper the national economic growth as well. This is because more money is getting spent on health measures on one hand and on the other hand, the reduced physical efficiency of people is harming the industrial output. According to one estimate, India is supposed to have spent 2.36 billion dollars on treatments for diabetes and heart diseases between years 2005 to 2015. In spite of new investigation techniques, medicines, tools and treatments, patient mortality is increasing and many people are forced to live life less efficiently.

The solution to this issue isn’t need for improvement in present treatments but is of creating public awareness for prevention of the disease. In that, awareness about the correct lifestyle, healthy diet with appropriate nutrition value, yoga and meditation shall be included. These things help fight heart diseases successfully. The awareness shall be created through programs for general public and industry workforce.

Researchers have predicted that between years 2008 and 2030 the world population is going to increase by 20%, meaning from current 6.7 billion it would go to 8.1 billion. Yet, the overall mortality rate is almost constant at 8.4 per thousand. The causes of deaths however, are seen to be changing. In 2008 there were 5 reasons out of 10 related to non communicable diseases. By 2030 the number is going to go up to 7. This means whopping 76% deaths in the world are going to be due to non communicable diseases.

Among the non communicable diseases, the proportion of heart diseases is going to be very high. In the year 2010, 23 million people died due to heart diseases the world over. Heart disease has become the number one killer, accounting for one third of the total number of deaths.